2. How Comedy is Different than Drama

Great comedies like “To Be or Not to Be” are based on a serious, sound dramatic structure. One difference between comedy and drama is that the audience, prepared to watch a comedy, never really believes that the characters will suffer irreparable physical damage. Do we ever think that the theater troupe in “To Be or Not to Be” will be executed or sent to a prison camp? No, but the threat is very real, and the stakes are high.

A serious dramatic structure for your comedy film is like a safety net that will engage the audience by keeping the jeopardy real while the potential consequences are not (except in black comedies like “One Flew Over the Cuckoos Nest”).

Example: When Felix Unger is dumped by his wife in “The Odd Couple” and plans to commit suicide by jumping out of a New York hotel window, we don’t really believe that we’re going to see him splattered on the sidewalk; but this does raise the stakes as we are asking, what’s going to happen? Felix goes to open the window to jump out, and throws out his back. He’s reduced from a high status martyr to a low status victim, and we laugh at his misfortune.

Have you noticed that without a solid dramatic structure that comedies often lose momentum in the middle, and rarely reach an audience-pleasing climax? Without a clear comedy set-up, you are often dependent on building a series of episodic skits.

Can you remember a very serious situation in your life that resulted in a major, belly laugh?
Key: our most embarrassing and humiliating experiences provide a reservoir for great comic moments. 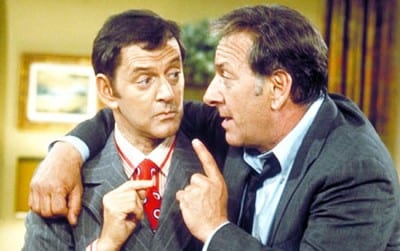