1. Why the Best Comedies Make us Laugh 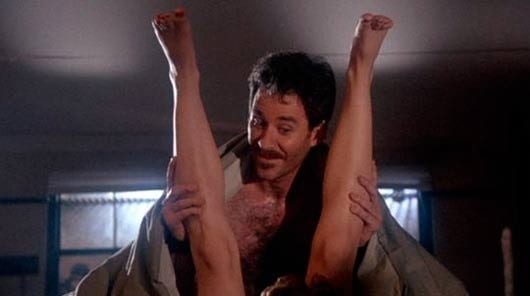 “Comedy is tragedy that happens to other people.” W. C. Fields

We laugh when we witness comic characters being humiliated in a public or social situation. In this clip from “A Fish Called Wanda” we’ll see how this happens to Archie (John Cleese) while he’s doing a foreplay striptease for Wanda (Jamie Lee Curtis):

This sequence is a good example of many of the Comedy Essentials that we will address later like: we laugh when comic characters are reduced from high status to low status; the comedy builds through a series of escalating reductions, causing greater and greater humiliation; the Comic Premise is based on the main character’s dilemma, in this case between Archie’s commitment to marriage and the law, and his falling in lust with a sexy criminal.

Why do we laugh at other people’s misfortunes within the context of a comedy film? It’s not because we are sadistic and uncaring: quite the opposite. It’s because we can relate and empathize with the comic character’s foibles (forgivable weaknesses) as they loose their footing and fall into social chaos.

In this way, chaos is a positive, transformational energy in comedy: it forces comic characters to come out of their neurotic comfort zones. Michael Dorsey (Dustin Hoffman) in “Tootsie” becomes a successful actor when he disguises himself as a woman, Dorothy Michaels. When his agent (Sydney Pollock) realizes what he’s done he says, “Michael, I begged you to get therapy.” In this sequence, we see Dorothy Michaels take the first step toward becoming the more authentic Michael Dorsey, when he reveals his true gender on national television:

Chaos ensues. It appears the love of his life, Julie, (Jessica Lange) will never speak to him again; he may never work as an actor again; and he has to return the engagement ring to Julie’s father, Les(Charles Durning).

We’re also able to laugh at other people’s misfortunes because we know these are comic actors “in a play,” the title usually implies that it’s a comedy, and we never actually believe that the consequences of their actions will cause actual, irreparable physical harm (this will be addressed in the next Comedy Essential).

When you set out to write a comedy, there is a common misconception that you won’t actually have to get your hands dirty, i.e., deal with the shadowy social issues from your own life. But if you want to write comedies that have meaning, it’s quite the opposite. The greatest reservoir for comedy writing is your life experiences that you feel the most shameful about – the experiences that we like to push down into our Shadows so no one sees this imperfect part of ourselves.

One of the scariest and ultimately most popular exercises in my comedy classes is when participants tell stories from their childhood and adolescence when they felt the most embarrassed or humiliated. Or course there’s an initial resistance to doing this since we tend not to tell these stories to close friends, let alone strangers. But since all great creative endeavors begin with leaving your comfort zone, there’s a magical transformation that happens. The very stories we’re too embarrassed to tell always get the biggest laughs!